Dairy cows are efficient recyclers, upcycling nutrients from food and agricultural byproducts that are either indigestible or undesirable for humans, thus avoiding the need to landfill or otherwise dispose of these materials.

The inclusion of byproducts in dairy rations allows a productive outlet for many materials that may otherwise be sent into the waste stream. If dairies did not use byproducts for feeds, much more land and water resources would need to be dedicated to dairy feed production. For example, if no byproducts were available, rations would need to include additional amounts of feed options like alfalfa hay and corn grain. 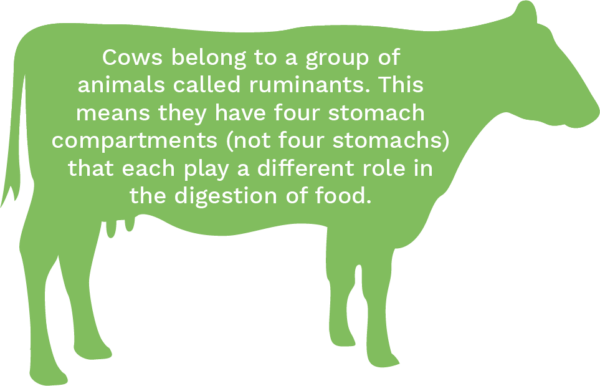 Therefore, a key benefit of byproduct use in dairy feeds is the reduced environmental and resource pressures on crop land and especially irrigation water in the San Joaquin Valley.

Hover over the images to learn how California dairy cows upcycle byproducts into nutrient-rich foods.

82% of CA cow feed is unsuitable for human consumption by nutrient composition.

Over 50 types of byproducts from food, fuel, and fiber industries account for about 41% of feed ration.

Almonds hulls are byproducts of almonds which people can’t eat, but provide valuable nutrition to cows.

Almost 100% of California almond hulls are fed to cows, keeping about 80,000 truck loads of almond hulls out of landfills per year.

California milk provides enough potassium to meet the daily needs for over 17 million people per year.

“Cows are natural bioprocessors and upcyclers of nutrients. As a result, cows will continue to play essential roles in healthy and sustainable food systems all over the world. This study demonstrates the environmental benefits in California, where dairy farmers have been especially successful in recycling and repurposing resources.”